In Where is my bastion host? and EC2 Instance Connect vs. SSM Session Manager I wrote about how to connect to EC2 instances inside a VPC without having to run a bastion host exposed to Internet but using the AWS API as the contact point. While this arrangement has many advantages over running your own server/service there is still one important use-case it can not do.

Above lets you get shell access or forward a port to EC2 instance (1), but connecting to any other resource inside VPC (2) e.g. internal load balancer and RDS database from your desktop isn’t possible, or it would require extra trickery such as sshuttle I’m going to explain in this post. 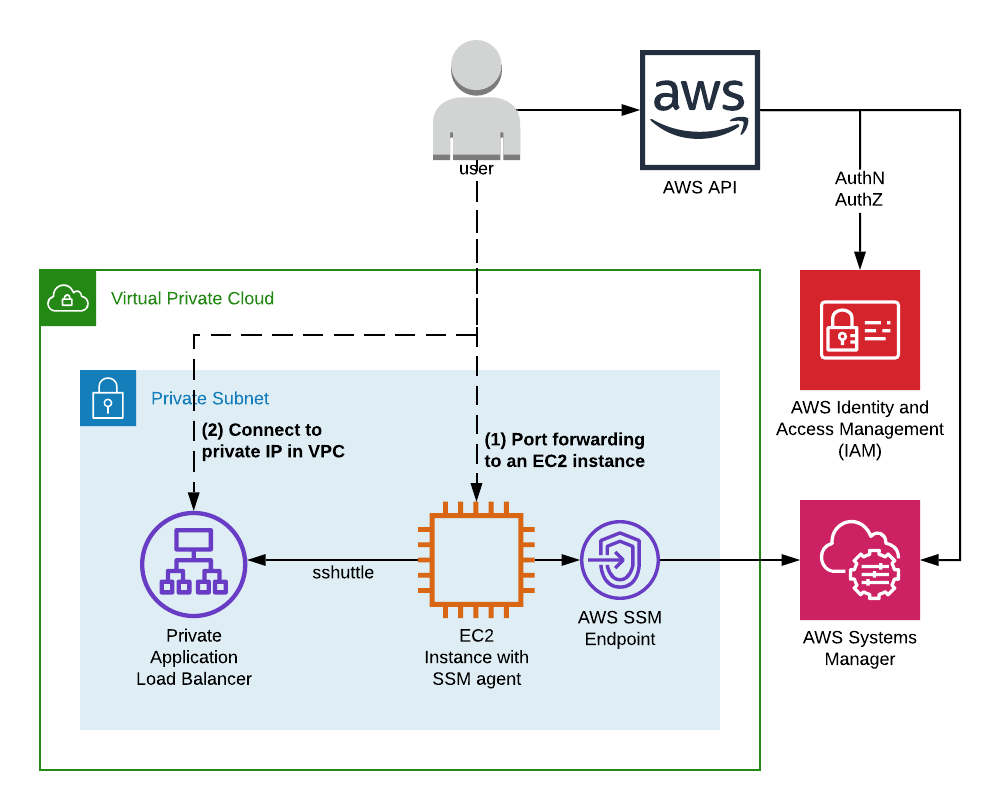 Some details are left off from the diagram, e.g. ALB requires min. 2 subnets/AZs.

Getting SSH work with Session Manager

Add the following into .ssh/config

NOTE1: Pre-requisite for this is to have aws ssm start-session working as described earlier. NOTE2: i-*.* will match EC2 instance IDs and mi-*.* is for managed on-prem VMs.

Now you can use ssh to connect instances via Session Manager.

Above may first seem like complicating things that were already working. It is possible to connect instance with aws -cli and session manager plugin without involving ssh. And that doesn’t require local user or ssh key to be deployed either. So why bother?

With above configuration, not just ssh but all tools depending on ssh are now working over the Session Manager connection. E.g You can copy fiels to/from EC2 instances with scp or get Ansible connection without a direct network connection to instance. And as the name suggests, sshuttle is also build upon ssh!

Digging a tunnel into VPC

For a demo, I created an ALB with a HTTP listener returning a fixed HTTP 200 response. I also created Route53 private zone, attached to the VPC, and added an alias alb.vpc.internal for the ALB.

The Beauty of sshuttle is that all the installed components will be on on your localhost, the only requirement for the remote host is python interpreter. There is a long list of supported installation methods on the sshuttle Github -page. As long as you have either Linux or MacOS you are covered.

Once you have sshuttle installed, opening the tunnel into VPC can be as simple as

Now I can connect to internal ALB from my desktop

Above demo did work only because I used AWS provided public DNS entry for the ALB. To resolve names from private hosted zones, e.g. alb.vpc.internal, you can use sshuttle option ---dns that will forward the DNS queries through the EC2 instance.

Unless you used your default ssh key for ec2-user when the instance was provisioned you should also specify the private key when opening the tunnel. While there is no specific option in sshuttle for this, you can simply add it to cmd sshuttle is using for connecting to remote host, --ssh-cmd 'ssh -i /path/to/.ssh/privkey'

And finally, if --auto-nets doesn’t detect the correct networks to be tunneled, you can specify addresses and ports manually. It is possible to define both included and excluded ranges.

AWS Client VPN is managed VPN service that does solve the same problem as sshuttle & session manager combination. If you are looking for long-term solution connecting to private resources in VPCs, I would consider AWS Client VPN as tunneling parameters could be centrally managed and overall experiense is more end-user friendly than sshuttle. For ad-hoc development and testing, sshuttle is quicker to setup and provides secure connections into VPC without exposing any servers to internet.